You are at:Home»World News»Business»Who is Fred Jones? 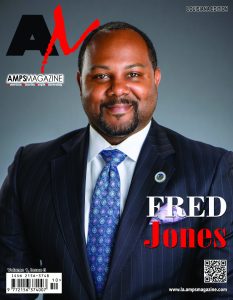 Frederick D. Jones is the son of Carol and Charles Jones. He is married to Ashanti M. Jones and has three children. He learned the importance of public service from his parents at a very young age. His mother is a retired teacher who taught in the public school system for over 30 years. His father served in the legislature for over 28 years. Fred is a graduate of Southern University and A&M College where he received a Bachelor’s of Science in Mathematics. After graduation he worked for the Louisiana Department of Revenue as a Tax Officer 1 while applying to Law School. Shortly after working as Tax Officer 1 Fred was accepted to Southern University Law Center. He continued to work hard in the class room and in his job outside of Law school. He was able to work for the Louisiana Legislature in the Legislative Bureau while at the same time he remained focused and excelled in his coursework; granting him graduation with honors from Southern University Law Center. Part of his duties while working for the Legislative Bureau was reviewing bills, working on joint resolutions, and working and editing suspension resolutions. Following graduation from Law School, Fred started working for the Ouachita Parish District Attorney’s Office as an Assistant District Attorney (ADA) under the Honorable Jerry Jones. While there, he was chosen to be on the domestic violence task force with all of the surrounding law enforcement agencies to help combat domestic violence housed at the Family Justice Center. After working on the task force for four plus years Fred felt it was time to venture out and join the family law firm. Representative Jones was honored to serve under a DA who was very knowledgeable, professional, and cognizant of the needs of the community. But, he was ready to work alongside his father, Charles Jones and his sister, Rosalind D. Jones and help take some of the load and stress off of them during the Law firm’s transition period. After nine years and counting with the family law firm Fred has really branched out and expanded his horizons. He is a Personal Injury and Criminal Defense Attorney and he currently practices in City, State, and Federal Courts. He has also been admitted to the Eastern, Middle, and Western District Federal Courts, and the 5th Circuit Court of Appeals. Fred has been elected as the State Representative for the 16th District representing Ouachita and Morehouse Parish. Representative Jones currently serves on the Appropriations, Judiciary, Criminal Justice, House Select Committee focusing on Disaster Recovery, and Judicial Compensation Committee.

Representative Jones says his inspiration to go into law was birthed from the good that he has observed, felt and, received over the course of his life when it comes to the judicial system. He saw that through the knowledge of the Law one is able to provoke change that is necessary and beneficial. The Law has the ability to enrich, protect and, inspire; when you find yourself on the right side of the law you are able to be a part of something much larger than yourself. Representative Jones believes the most difficult part of his career was transitioning from undergrad into Law school. Law school’s structure and program is very different from the flow of undergrad, so getting use to the flow and structure of Law school took a lot of adjusting. You are held to a much more rigid schedule with no room for error. The amount of course work covered; combined with the challenge of retaining and executing new information and the ability to practice learned concepts all on one exam at the end of each semester created a high pressured environment from time to time. None of that was a deterrent for Representative Jones when it came to Law School. He knew that all of his hard work and dedication would pay off in the end. Fred believes the greatest benefit of becoming a lawyer is the fact that he is able to help people during some the most difficult times of their lives. Also, a law degree allows you to practice in a multitude of sectors and in most cases allows you to practice in an area that you have invested interest in. Representative Jones honestly did not know where his Law degree would take him. But he knew that he wanted to help people and build a stronger community by making a difference that would protect and enhance the lives of others. While being a prosecutor Representative Jones was able to help many people and get justice for many victims. Representative Jones says shortly after the election he spoke with Representative Michael Echols and Mayor Henry Cotton about some plans that they had for the City of Bastrop. One of the plans they all spoke on included the Economic Development District. He said he was happy that they were able to bring this to fruition; and now they have to attract major industries to the area and help drive the economy for the City of Bastrop.
Representative Jones plans on making the community better by first being in the community and listening to the needs of citizens in the community. 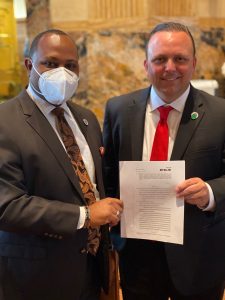