Shonice Jeanay is from a small town called Zwolle, Louisiana. It is about three hours south of Monroe, Louisiana. Shonice currently lives in Monroe, where she is a doctoral student at Grambling State University. She is studying to receive her PHD in Developmental Education. She is set to 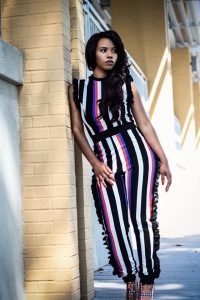 graduate in 2021 from the program. While studying to receive her PHD Shonice also works as a support coordinator at a mental health agency.

Aside from Shonice’s passion for criminal justice and mental health; She also has a passion for acting and modeling. She started off acting as a child at her school and church. Then when she gained more experience and went off to college, she joined the University choir and joined the theater department. Shortly after that Shonice began acting in Community Theater and she was so successful and enjoyed doing it that it led her to begin acting in Premier Theater. This helped her love for the art to grow. Shonice was able to play different types of roles and be all types of characters. One-character Shonice enjoyed playing was a character named Shelia Wondering for a play called Murder at Café Noir. Playing this role gave her the opportunity to connect with the 1920’s and experience the style of clothing and music from that time. She was even able to do photoshoots to promote the play; this gave her the opportunity to go get professional photos taken as advertisement. Which then led her into doing some modeling in her spare time. Shonice has always been active and so it is just one of the things she loves to do. Shonice will make her own wigs if needed for certain roles and she will not wear wigs unless she has physically made it herself. Hair stores do not advertise black natural hair in an appealing way, so Shonice decided to make her own afros and natural look. She owns many wigs and each one she makes is made from scratch. Shonice likes making wigs because that is her yoga; it is her escape from reality and gives her a moment of peace and tranquility.

In 2016, Shonice started a nonprofit organization called Positively Speaks. Some of the work the organization does is feeding the homeless and taking high schoolers on college tours. Due to the outbreak of COVID-19 this was the first summer that she was unable to do it. Shonice started this organization because coming from a small town where you did not have the opportunity to speak to mentors about college did not sit right with her. She wanted to be able to give the students coming in behind her a chance to see different campuses and speak to them about attending college. She told herself once she got her master’s degree, she wanted to develop her own LLC, and she wanted to give back to the kids from underserved neighborhoods. She also loves giving back to the homeless and making conversations with them and providing help in areas of need to them. Shonice works with other types of organizations all the time because this allows her to pair up with other great minds and enables her to reach and help a broader spectrum of people.

Some fun facts about Shonice Jeanay are she is a country girl who loves a home cooked meal of collard greens and neck bones. Her two celebrity crushes are Tyrese and Lisa Raye and her favorite movie is Dreamgirls. Her favorite type of music is Rhythm and Blues (R&B). In the next five years Shonice sees herself opening her own development center and plans on becoming being a yoga instructor. Her idea place of opening a development center would be in Settle, Washington. Shonice’s grandmother is the biggest impact in her life and is her inspiration. Shonice says, “Just keep pushing and never ever give up on your dreams.