You are at:Home»World News»Politics»Elijah Brass Speaks Out 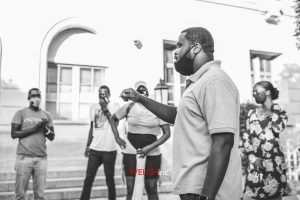 Elijah Brass lll is a native of Monroe, Louisiana. He is not new to protests being that his grandfather was always vocal in the community. His grandfather (Elijah Brass Sr.) was so vocal and making such a difference in his community that it angered many of his fellow citizens. It angered them to the point that they formed together and put a hit out on Elijah Brass Senior for $2,000. Elijah says when he first learned of the hit on his grandfather it was a shock to him. He soon realized how inspiring and encouraging it was. It really showed him how much of a difference his grandfather was making and inspired him to make a change as well in his community no matter the cost or risk. Elijah knows that his grandfather would want him to carry on the legacy and continue to fight against injustice and raise his voice. Elijah knows that God will carry him safely wherever he needs go. Elijah wants citizens of his community, his children, and grandchildren to be able to read an article or see an interview and be proud of the work he has done.

On Monday, June 8th, 2020, Elijah Brass lll was part of a protest in Monroe, Louisiana along with others organized by a group that he co-founded called B.R.I.D.G.E, INC. which took place at the Ouachita Parish Courthouse. In late May, OPPJ Vice President District B, Jack Clampit made a Facebook post that read “There is a simple way to control the looters, just two words. Choot em”. After receiving tons of backlash from citizens in the Monroe community, the post has since been deleted. Elijah along with many others in the community were outraged about the post, and is asking for a resignation from Clampit. Elijah was not nervous about being part of the protest; he said he actually felt 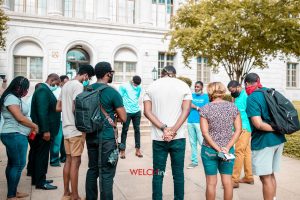 empowered and felt like this was the best time for him to take a stand and speak up. He feels as though this was a moment ordained specifically for him. Elijah says he could not stay home and sit back and let this moment to take a stand pass him up. So he invited his sister and his two brothers to join him in protesting. He says it was a proud moment for him to be a part of the movement, and he wasn’t nervous at all. Elijah takes pride in using his voice and was very excited about protesting. He says for far too long the majority has been silent and the minority has been loud. Elijah believes if we all stand together in solidarity these behaviors will no longer exist. These behaviors have been condoned for far too long and people are no longer willing to sit by and allow this behavior to continue happening.  Elijah believes justice for him would mean that his children and his future grandchildren won’t have to live in a society where they are judged by the color of their skin. As Dr. King said, “They will not be judged by the color of their skin, but by the content of their character”. Elijah thinks that it is important that we stand for things in the future and not just today. We cannot allow our voices to be silenced again.

In today’s world people see racism as what it was 40 years ago and they do not believe it has evolved, so when you try to identify it some people will say that’s not racism. When you look at an elected official who calls on his constituents to shoot looters, Elijah has a major problem with that. First, there was not anyone in Ouachita Parish who was looting so Jack Clampit did not have the right to say that. Even if there were people looting that still is not the correct response to be made. There are a multitude of different ways those people could have been dealt with outside of being shot. People voted for Clampit and they shouldn’t have to see or tolerate behavior like this. After the post was made, Clampit was warned by someone on Facebook that his post was insensitive and would reach people of multiple ethnicities, Clampit doubled down and stated, “I’m not worried about the next election. I am concerned about the business owners who are losing their dreams due to thugs. Many of which are black.” Going back to the original statement that is the evolution of racism you have to keep in mind the evolution of subliminal messages. Businesses were still in phase one of being closed, and majority of them were not looking to reopen soon with Covid-19 numbers still on the rise. There was never any looting going on but now with Clampit’s approval people are going to occupy their businesses just so they can sit in wait and have the possibility of shooting a looter. Brass says for Clampit to call to action and suggest shooting looters, was a way to condone and incite the behavior that has already been happening across the nation. Elijah says it’s very disturbing to him that people take pride in the thought of taking another person’s life. Especially the lives of Black and Brown men and women. Jack Clampit being an elected official calling for people to harm and possibly kill you over something that can easily be deescalated is not the behavior that should be 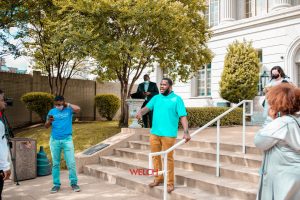 represented and tolerated by someone in office. It is very disturbing to have so many different congress people making the same comments or sitting by and not correcting the behaviors of their fellow congress people. Brass believes anything is possible, but it’s going to take the entire community to join together and demand change. If the majority would just speak out and come together collectively by bombarding his cell phone and flooding his emails then maybe a difference can be made. This is not the first time that Clampit has made statements that were offensive to a particular group of people. When people are consistent with their message and continue to target a particular group of people with their statements, changes need to be made because obviously that official doesn’t have a particular group of citizens in mind. Clampit needs to know that things he has said are unacceptable and he needs to be held accountable for it. Hopefully the voices of the citizens will be heard and Clampit will know he needs to resign.

When asked about his future, Brass noted that he began the process of founding a Non-profit that would eliminate many disparities in the community. This Non-profit is expected to start work in late summer to early fall 2020. He is optimistic that the community will band together to support the Non-profit and assist in meeting the needs of the community. Brass also desires to be more involved in the political conversation and wishes to create conversations amongst his generation that inspires political participation. He believes that everything we do involves politics in some form or fashion and that people do not have the luxury of not having any understanding of politics or an eagerness to learn and get involved in some way.

Connie Morgan is a native of a small town called Columbia, Louisiana. Growing up in a small town had it's challenges. Connie was very good in sports especially in basketball where she played a point guard. She loved the game and was very passionate about it. Connie started playing the game of basketball in elementary. The PE teachers saw how she handled the ball and before she knew anything she was put on the (5th) grade as a point guard and played all the way through high school. As she entered Junior High School Connie discovered that she had another passion and that was being in front of the camera, but she loved being behind the camera just as much.