You are at:Home»Community»Community Clean Up And Voter Registration Drive

On Sunday, July 5, 2020 at Mt. Nebo Park, a newly found nonprofit organization called Building Relationships Inside Different Generations & Ethnicities (B.R.I.D.G.E.) held their first event in Monroe, Louisiana. They wanted to do something in the community that would make a difference. So, they decided to set up a community cleanup and Voter Registration Drive 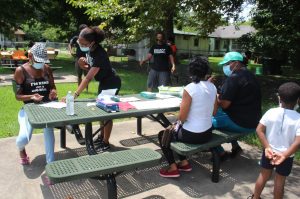 in the community on the South side of town. This nonprofit organization has seven members consisting of: Urald King (President), Elijah Brass (VP), Vanisha Jackson (Secretary), Anthony Marshall, Terry Martin, Cierra Turner, and Larrese Rollins. People in the community came out to help with the neighborhood cleaning and the setup of the Voter Registration Drive. Urald King said they are trying to get more involved in the community. King says that they are trying to “be a B.R.I.D.G.E.” between the generations before them and the generation after them. He says he notices that there is a big void in communication between the older generation and the younger generation. Urald says that their job is to get involved in the community as much as they possibly can to make a difference. He says that more people should be present at Jury meetings and start doing everything possible to get their faces and voices out there so there can be more representation for the community that look like you and me. 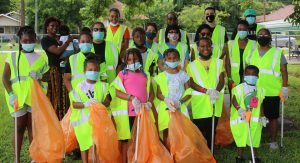 Connie Morgan is a native of a small town called Columbia, Louisiana. Growing up in a small town had it's challenges. Connie was very good in sports especially in basketball where she played a point guard. She loved the game and was very passionate about it. Connie started playing the game of basketball in elementary. The PE teachers saw how she handled the ball and before she knew anything she was put on the (5th) grade as a point guard and played all the way through high school. As she entered Junior High School Connie discovered that she had another passion and that was being in front of the camera, but she loved being behind the camera just as much.